As a high school basketball player with no plans to play college ball, Rob Crabtree could not have predicted that someday, his interest in sports would lead to a career in sports medicine.

Today, as Administrative Director of Orthopedics for UAB Medicine in Birmingham, Alabama, Crabtree still assists athletes recovering from injury—not as a practitioner, but as a business manager. He oversees the orthopedics clinic at UAB Hospital-Highlands, which treats 200 patients a day, from athletes of all ages to those recovering from bone ailments and all types of injuries.

“I’ve always had a passion for sports,” Crabtree says, “and I’ve been very lucky to be able to combine that passion with the medicine side of the industry. I can confidently say that I enjoy going to work and helping those in need of healing.”

In March 2015, Crabtree worked with Clearwave to introduce self-service check-in to UAB Hospital-Highlands’ orthopedics division. It’s a decision that not only has had a profound effect on physician and patient satisfaction, but also the financial health of the organization. Now, he speaks about the benefits of digital check-in with members of the American Alliance of Orthopedic Executives (AAOE).

“It’s pretty neat that our colleagues have been able to see the tremendous improvements Clearwave’s self-service check-in platform brings to both an academic medicine and private practice environment,” Crabtree says. “Quite frankly, there are few innovations that work well in both environments.” 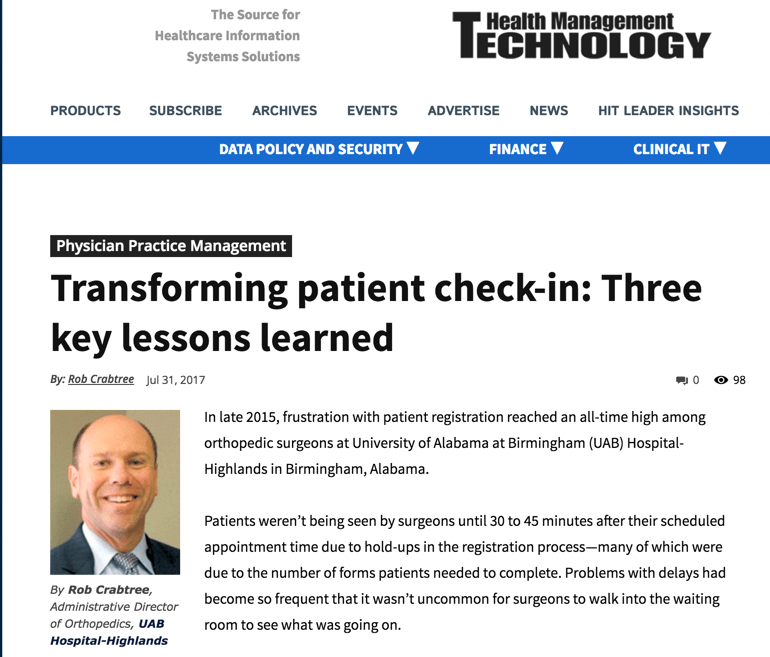 Why Patient Communication is More Important Than Ever

How to Use Chatbot and Online Scheduling to Increase Patient Acquisition

Reading Time: 4 minutes In addition to utilizing traditional marketing techniques, it’s important to expand your efforts to include new technology in order to…

Planning Ahead For 2023 – How to Solve For Operational Inefficiencies

Reading Time: 5 minutes When looking ahead to 2023, it’s important to consider ways to improve the function and success of your practice in…